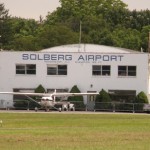 On May 4, 2015, a Hunterdon County Superior Court Judge issued a sharply worded 54-page ruling in the protracted eminent domain litigation involving Solberg Airport (N51) and Readington Township, New Jersey.  Judge Paul Armstrong ruled that the Township’s claimed environmental purpose for condemning land owned by the airport was actually a “ploy” to thwart the airport’s expansion plans, which amounted to a “manifest abuse of the power of eminent domain.”

Characterizing the Township’s motives to create a contiguous open space greenway using airport property as “deliberate subterfuge,” Judge Armstrong noted that “the evidence clearly and convincingly shows that these reasons were a pretext for Readington Township’s true purpose, which was to limit the airport’s capacity to remain economically competitive and to limit its expansion”.

The case itself dates back to 2006, when the Township enacted an ordinance authorizing the taking of approximately 726 acres of land belonging to the airport. Initially, Township officials sought municipal control over factors like runway length, hanger size and jet aircraft noise at the airport.  But after the ordinance authorizing the condemnation was passed in July 2006, Township officials were sharply criticized for the Township’s use of its eminent domain power in this regard.  Following the advice of its retained public relations firm, the Township shifted focus from control over airport operations to preservation of open space.

Judge Armstrong noted that testimony of several Township officials showed “that each, after their own fashion, were faithful pupils of the shifting strategies of their public relations firm, CN (the public relations firm)”.  According to the judge, Township officials publicly “demonized” the airport “by disseminating a catalog of fears and appeals to mistrust which mischaracterized” the expansion plans.

The court re-vested Solberg Aviation Co. with ownership of the property and awarded it counsel fees and expenses, including expert fees, to be calculated later and paid by the Township.  The Township has forty-five days to file an appeal of this decision.

Land use and zoning are volatile issues, especially on the local level when concerning such high-profile uses as airports.  Owners and operators should seek legal counsel with experience in both land use and aviation.  The firm of Inglesino, Webster, Wyciskala & Taylor, LLC offers such expertise, as well as a wide-range of legal services, to its clients.

California-based Weco Aeropace Systems Inc. has been charged with using unapproved parts, including paper clips, to repair aircraft.  On September 29, 2012, federal prosecutors in the Eastern District of California indicted former executives of Weco on a wide range of fraud counts.  The indictment alleges that the defendants allowed technicians to use unapproved parts in repairs, and that Weco Aerospace lacked the requisite equipment to properly install and test major aircraft components, including converters and generators.

Specific allegations include the fabrication of end bell locator pins from a drill bit and a paper clip, and the installation of those fabricated pins into motors which were then installed on aircraft in violation of FAR Part 43.  The defendants are also charged with falsifying aircraft records by certifying airworthiness approval tags (FAA Form 8130-3) for components which were not overhauled properly.

This case highlights the importance of ensuring that aircraft repairs and system overhauls are performed by qualified shops using authorized parts.  While no aircraft owners were implicated in the indictment, aircraft owners and pilots conducting preventative maintenance pursuant to FAR 43.3(g) (as specified in Part 43, Appendix A) should ensure that they are using only approved parts and procedures.  As this case points out, overlooking any required testing procedure is also illegal and problematic.  For this reason, those performing preventative maintenance should have their work checked and tested by qualified individuals.  Navigating the complex regulations governing aircraft repair and maintenance is fraught with legal pitfalls.  Any questions regarding the legality of maintenance, repairs, or airworthiness checks should be referred to an experienced aviation attorney.

In a unique ruling, U.S. Magistrate Judge Kevin Chang sentenced pilot, Thomas Leroy Hauptman, to donate 500 hours of flight time as restitution for violations of the Lacey Act.  Mr. Hauptman estimates that the flight time will cost him approximately $500,000, a sentence that he called, “expensive but fair”.  Local news coverage indicates that Mr. Hauptman pleaded guilty to illegally transporting deer and mouflon rams between Maui and the mainland island of Hawaii.  The Lacey Act, which dates back to 1900, is designed to protect native species by prohibiting the introduction of non-native species into an ecosystem.

In addition to FARs, pilots should always be cognizant of laws, regulations, and rules which regulate flight activities, including the transportation of cargo and live animals.  Although Mr. Haputman might not have violated any Federal Aviation Regulations, he did illegally transport wild animals which resulted in a hefty fine.  Before departing on flights involving the transportation of passengers, cargo, or animals, pilots should consult with an experienced aviation attorney who can research and advise them on any applicable laws governing the trip.

The Minnesota Supreme Court recently held that Cirrus Design Corporation is not liable for its failure to train a VFR pilot in procedures to properly escape an inadvertent encounter with IMC in its aircraft. In its July 18, 2012 decision, the Court held that written instructions located in the POH and other literature provided with the SR22 aircraft at the time of sale fulfilled Cirrus’ duty to warn pilots about the dangers of encountering instrument conditions during VFR flight. Following the January 18, 2003 accident in which pilot Gary R. Prokop and his passenger James Kosak were fatally injured, a trustee of Kosak,s estate sued Cirrus alleging that it failed to properly train Prokop a non-instrument rated pilot in procedures to escape inadvertent encounters with IMC including the use of the SR22’s autopilot to level the airplane’s wings. Although Prokop attended most of Cirrus’ model-specific transition training, he skipped lessons entitled “VFR into IMC procedures.”
The Court observed that although “no party disputes that as a supplier and manufacturer of airplanes Cirrus had a duty to warn foreseeable users like Prokop … Cirrus duty to warn did not require Cirrus to provide flight lesson [VFR into IMC procedures].” Finding that Cirrus fulfilled its duty to warn pilots about the dangers of VRF flight into IMC procedures the Court held that “[t]he duty to warn has never before required a supplier or manufacturer to provide training only accurate and thorough instructions on the safe use of the product as Cirrus has done here.” The Court also noted that under a theory of liability for failure to act, Cirrus could be held liable for failing to provide the VRF into IMC procedures flight lesson to Prokop. However, under Minnesota law, the Court held that Cirrus was not liable under tort theory for failing to provide the flight lesson because the lesson was included in Cirrus’ contract of sale with Prokop and was therefore a contractual obligation instead of a common law duty to act. Because the common law of other jurisdictions might recognize a common law duty to act in the presence of an existing contractual relationship, a similar case might turn out differently in another state.